In the grand scheme of Hermès handbags, the understated Évelyne is often overlooked. From its equestrian origin to its use today as a convenient carry-all crossbody, there is more to explore than meets the eye with this house staple. Hermès has long been pulling new design innovations from their equestrian roots, and this unchanged facet of the house's heritage inspired the Évelyne bag in a more literal sense than most.

In 1978, then head of the riding department Évelyne Bertrand developed with her team a new design for a bag that would be a convenient, hands-free method to transport hand-held stable equipment like brushes, combs, and picks. She landed upon a design for a crossbody bag that features one removable, non-adjustable shoulder strap attached to a simple leather body with a small belt closure that snaps into place to secure its contents. The defining feature of this new design is more of a ventilation feature than aesthetic ornamentation, the “H” shaped hole design on one side. These perforations allow for air to have free exchange with the equestrian care tools, as to allow aeration and breathability. At this time, the Évelyne bag was designed to be worn with the perforated side facing the body but has since been reversed due to the trajectory of this design’s life at Hermès from stable equipment to a luxury icon.

THE RISE OF THE EVELYNE

When it was originally released, the Évelyne bag was strictly quartered in the equestrian department and was not envisioned to be worn as an everyday bag. This is where the Évelyne bag remained mostly unnoticed until the early to mid-2000s when the bag was inexplicably moved to the leather goods department. It was here that the Évelyne explosion began. The bag began to catch on, likely due to its easy design and lower price point. Many began to see the bag as an entryway into the exclusive house, an opportunity to own a piece of the proverbial pie. The combination of this price point and efficient design lent much commercial success to the Évelyne bag the world over, and it is now seen as yet another irreplaceable cornerstone of Hermès’s handbag roster.

An often omitted and easily confused feature of the Évelyne style has to do with customization. In addition to the four sizes available, the Évelyne bag has been offered in three “generations” (except for the TPM and TGM sizes, for which the former has no generational designations, and the latter was not introduced until after Gen I had been discontinued). These three generations were introduced with some overlap through the course of the bag’s existence, and as the bag shifted from a piece of equestrian equipment to a stylish handbag for women. The generational breakdown is as follows:

The Évelyne bag has one non-adjustable shoulder strap and no exterior slip pocket. The Évelyne bag has one non-adjustable shoulder strap and one exterior slip pocket. The Évelyne bag has one adjustable shoulder strap and one exterior slip pocket. These three generations of the Évelyne bag allow for more versatile functionality, seemingly tailored to what a client may need. 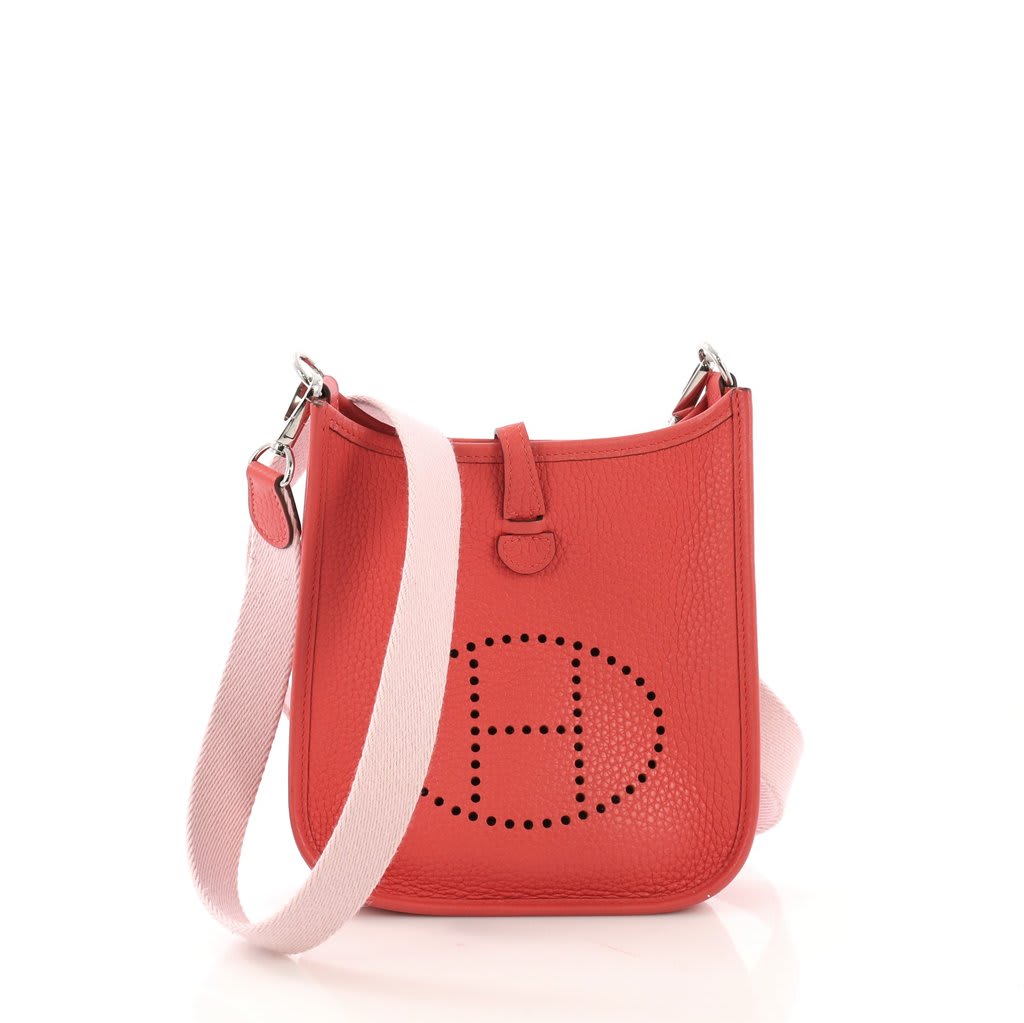 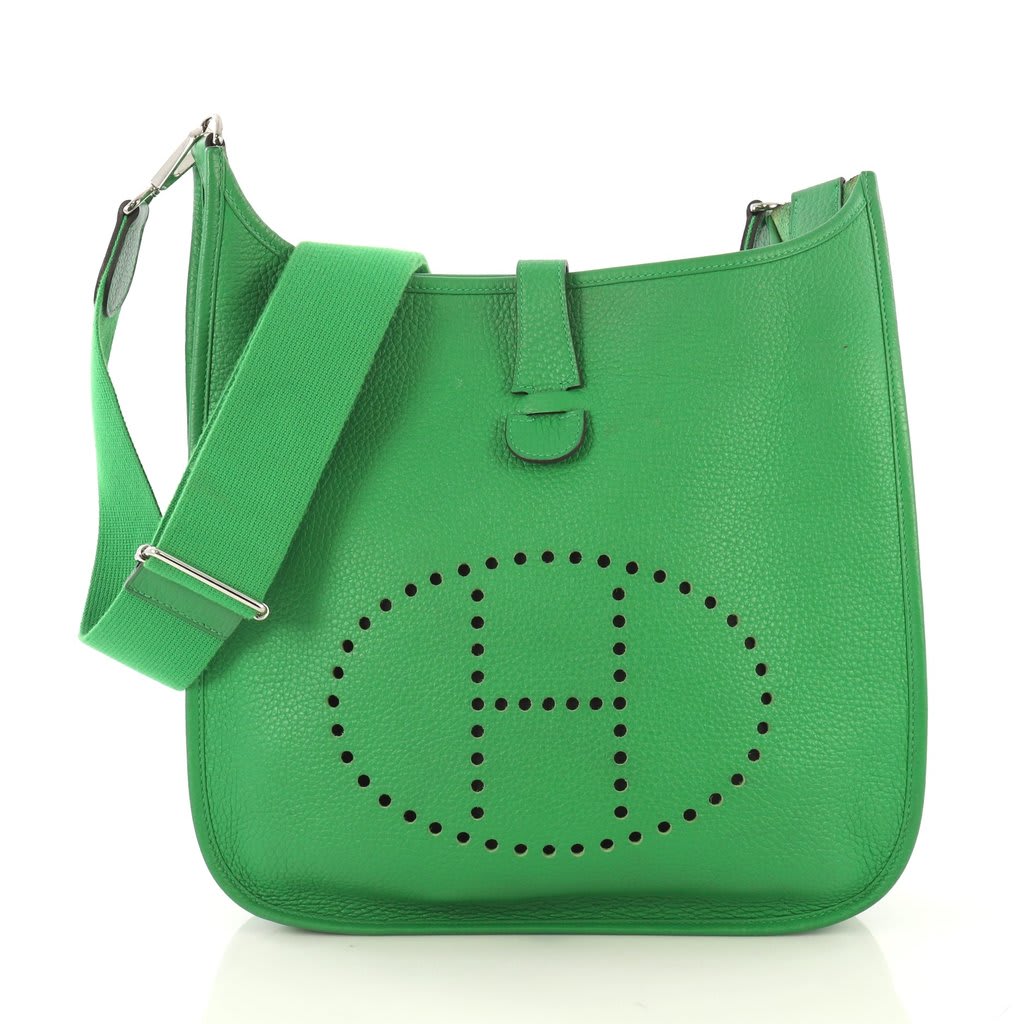 In Fall of 2016, the Évelyne bag got a major minimalist redux. The current creative director, Nadège Vanhee-Cybulski, took the reins on this classic style and reduced the bag to its essential silhouette. The perforations were removed in favor of an embossed diamond “H” insignia, and the construction was converted to the houses timeless “Sellier” construction, in which the edges are turned out to create a geometric and starkly structured finish.

This new design was enshrined as the Sellier Évelyne and comes in two of the traditional Évelyne sizes: 29cm PM and 33cm GM. To date, the Sellier Évelyne has been offered in both Vache Hunter leather (typically seen in the Herbag line for flaps, trims, and straps) and the more elusive Epsom leather.

The Évelyne bag is a relatively recent addition to Hermès’s repertoire in comparison to the more prolific Birkin and Kelly styles but has become a cornerstone bag since its move from the riding department. An easy, utilitarian staple to have in any wardrobe, the Évelyne is sure to stick around for years to come. Perhaps in the coming years, we will see some limited editions and special collections of this bag. Anything is possible with Hermès.