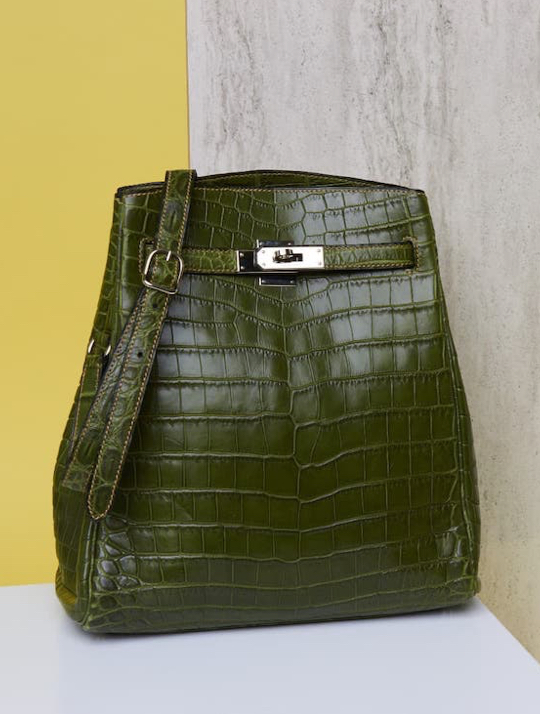 Do you know the difference between crocodile & alligator

How about Porosus and Niloticus Crocodile skins? Well, for Hermès, the world’s finest exotic goods producer, differentiating all of these meticulously crafted materials is a snap! You just need to know where to look. 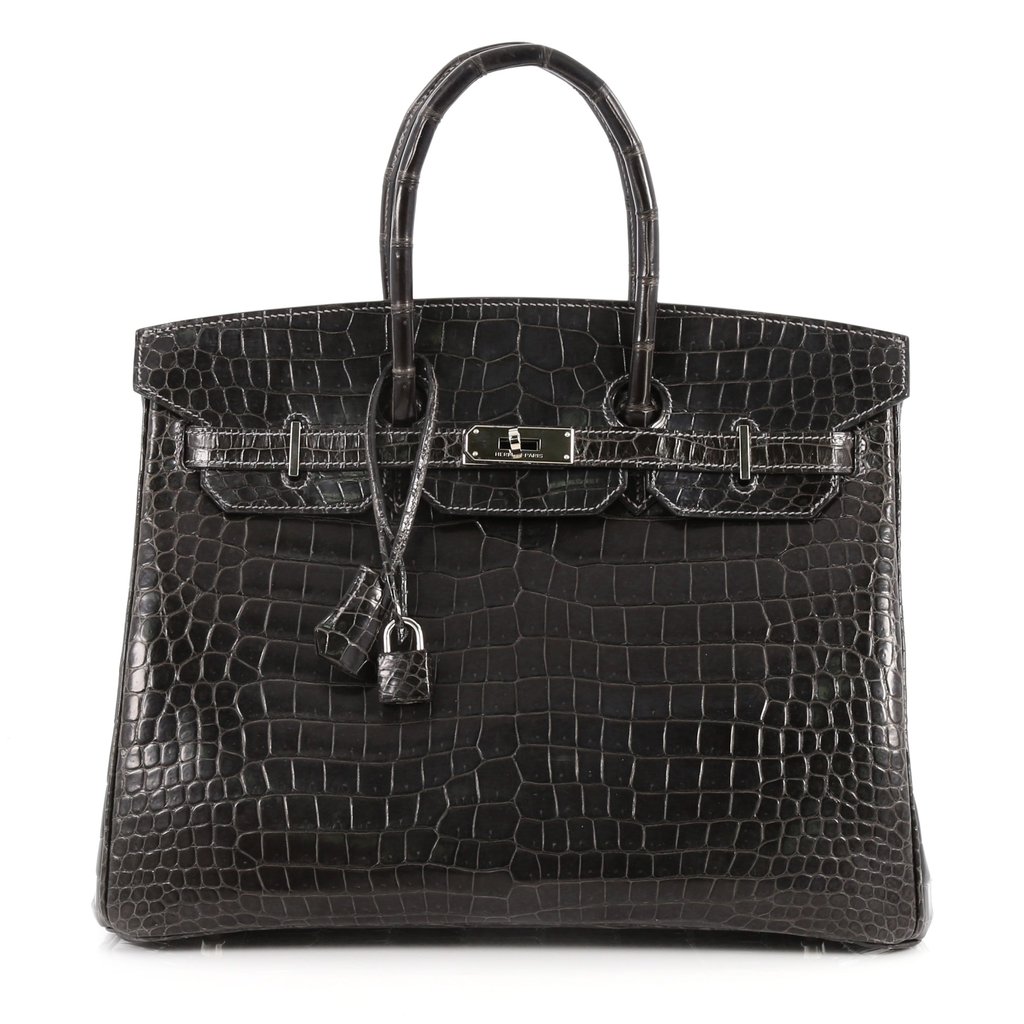 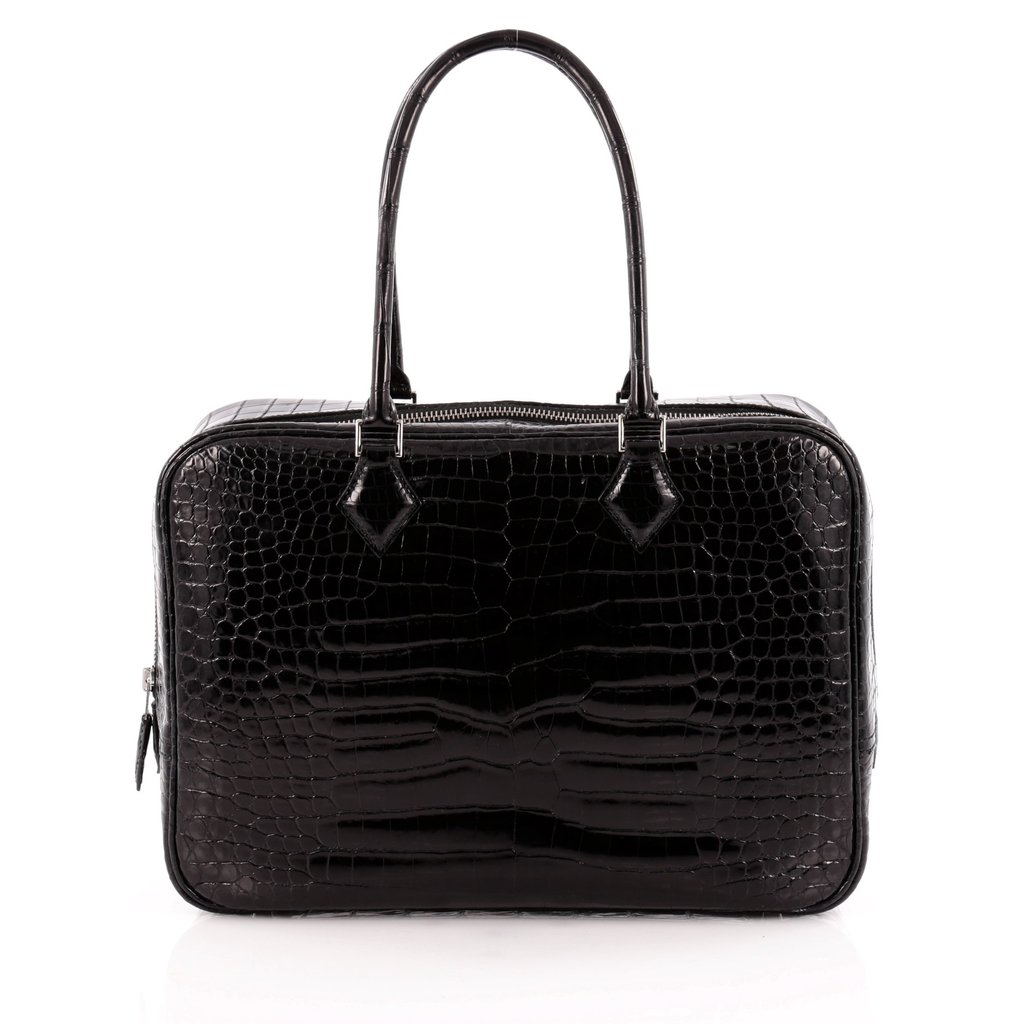 The king of exotics, fetching the highest prices on the primary and secondary markets, is Porosus Crocodile. This skin is acquired from the underbelly of Crocodylus Porosus crocodiles, which Hermès farms in Australia, but it is a saltwater species common to the entire Indo-Pacific region.

Porosus Crocodile is characterized by the tiny pores on each scale, which gives this species its name. Although not perfectly symmetrical, given this skin is natural and not a pressed leather pattern, it is known to have scales with qualities we like to call the “three S’s”: small, square, and symmetrical, which makes it so sought after by collectors

This skin comes in two varieties: Matte and Lisse (shiny). The Lisse effect is achieved from an arduous agate stone polishing, only after the skin has been carefully dyed to the exacting colorations that Hermès is known for.

Porosus Crocodile is distinctly marked with a “^” caret mark in foil, which can be found next to the brand stamp, typically located on the front panel of a bag, or on the interior lining in smaller accessories such as wallets, leather jewelry, and charms. 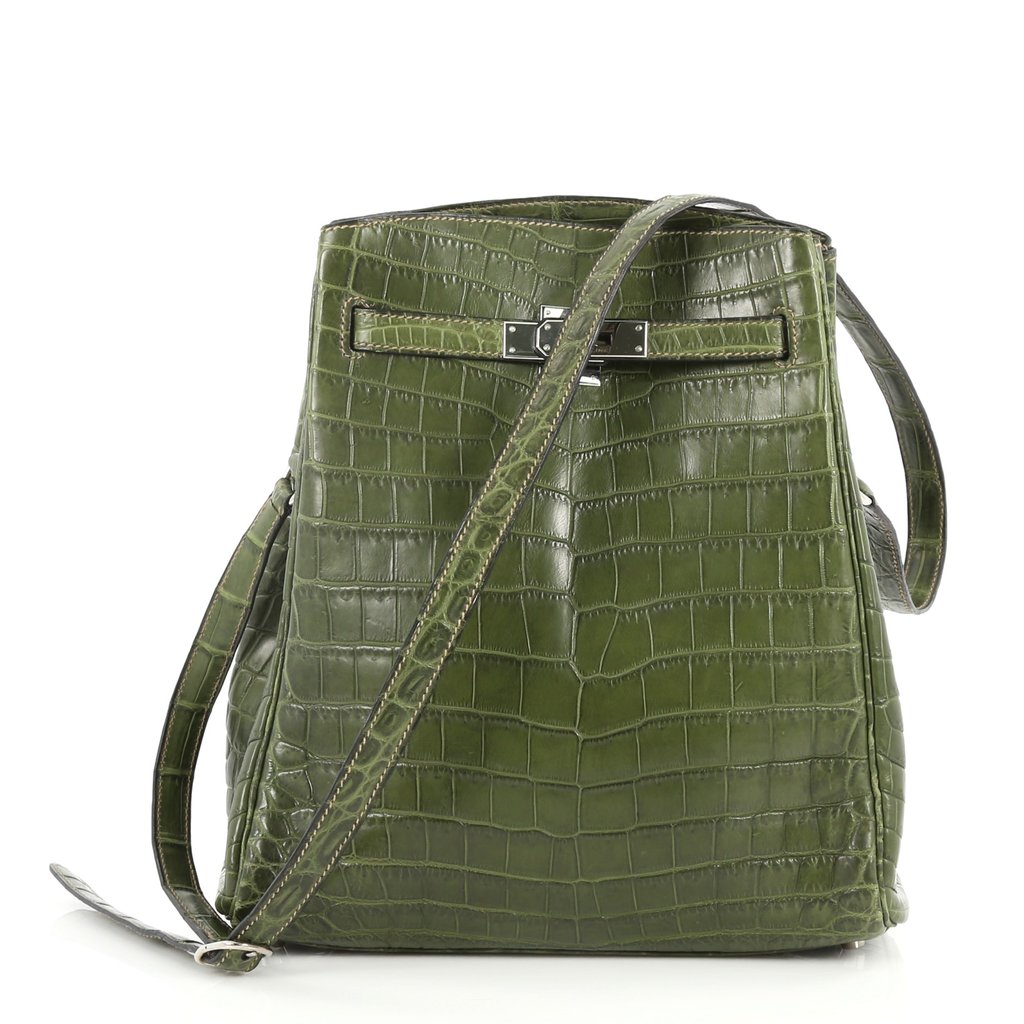 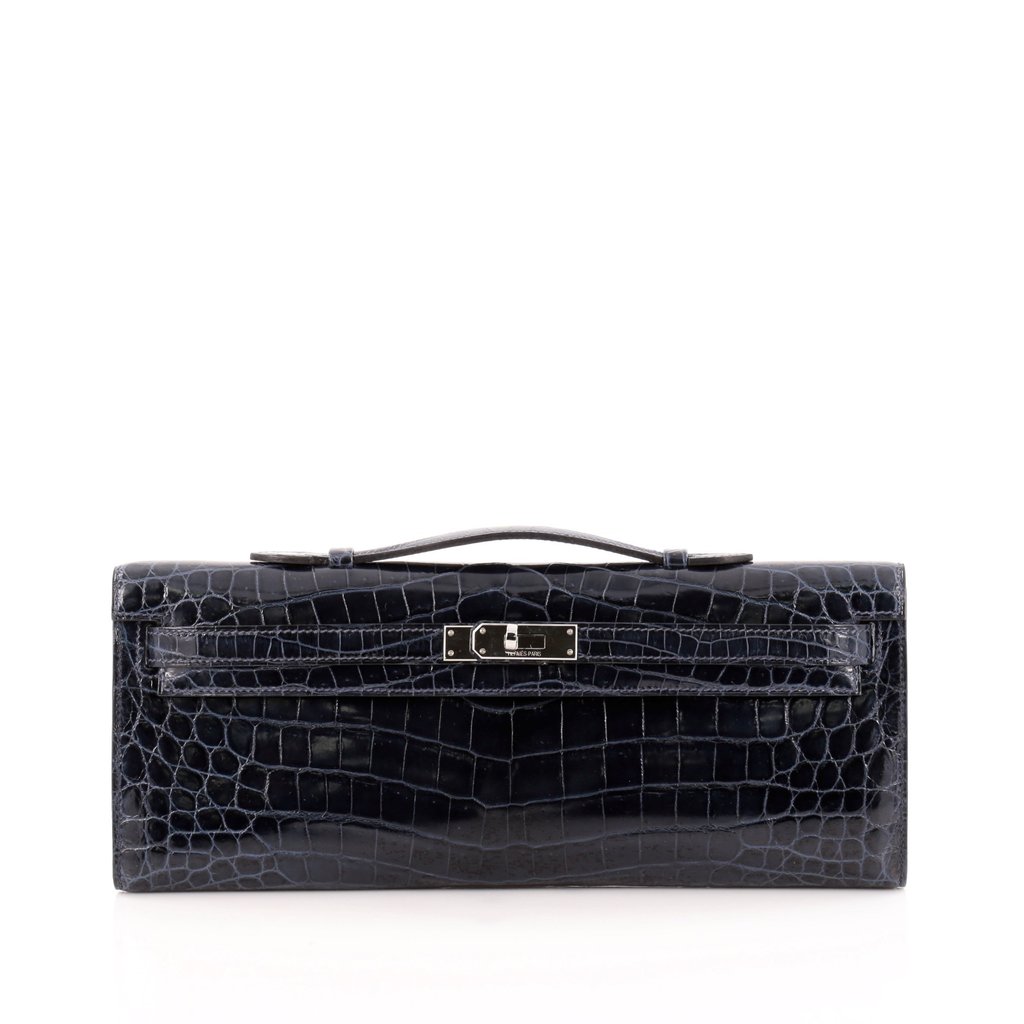 Coming in close second in terms of resale value, we have Niloticus Crocodile. This skin is harvested from Crocodylus Niloticus crocodiles, a freshwater species native to the Nile River region of Africa, but found broadly across the continent. Hermès’s sources are located at the southernmost tip of the Nile River, in Zimbabwe.

The Niloticus Crocodile gets its name from the region in which it is native, the Nile River. These skins are characterized as the slightly larger cousin to the Porosus Crocodile, with subtly larger scales, and often seen lacking distinct pores, although they are sometimes noticeable on certain samples.

A quick way to identify this particular skin is to take a closer look near the brand stamping, as Niloticus Crocodile is distinctly marked with a “..” diaeresis mark in foil. 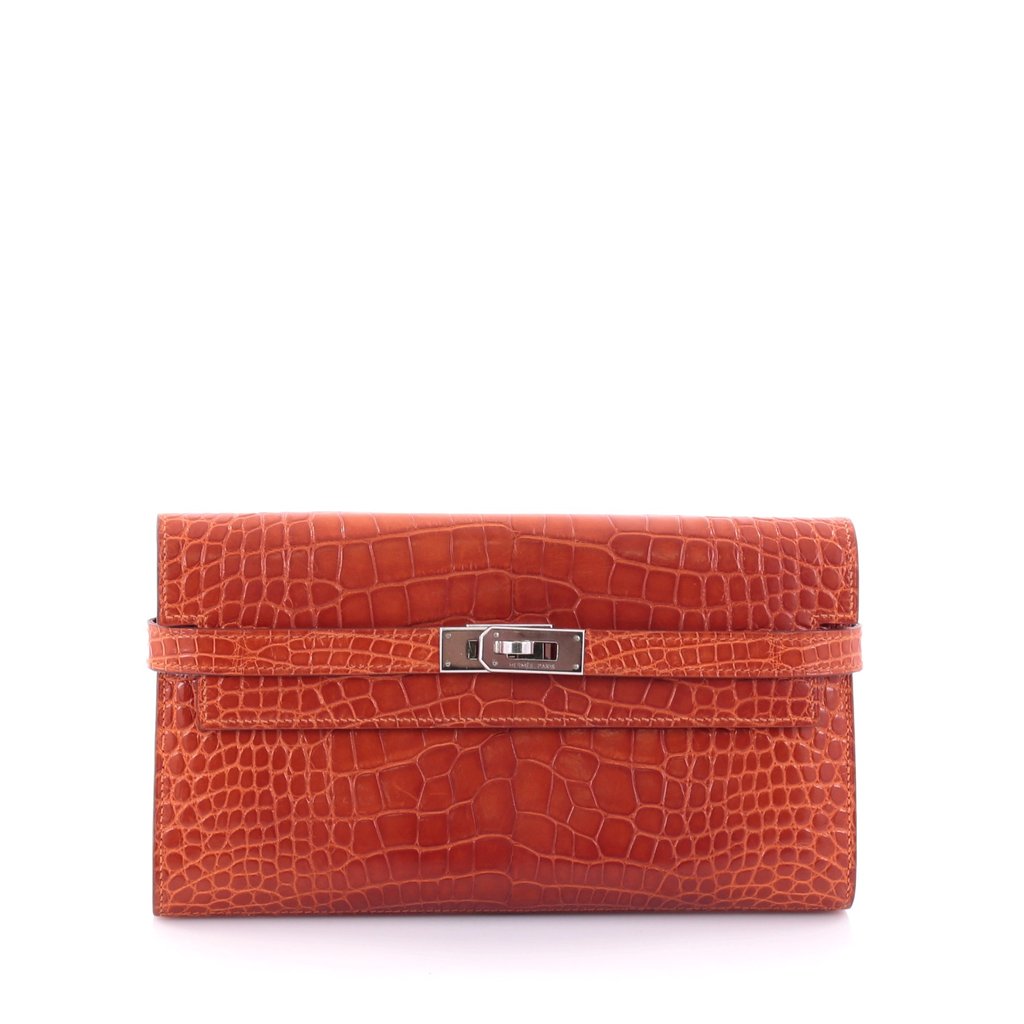 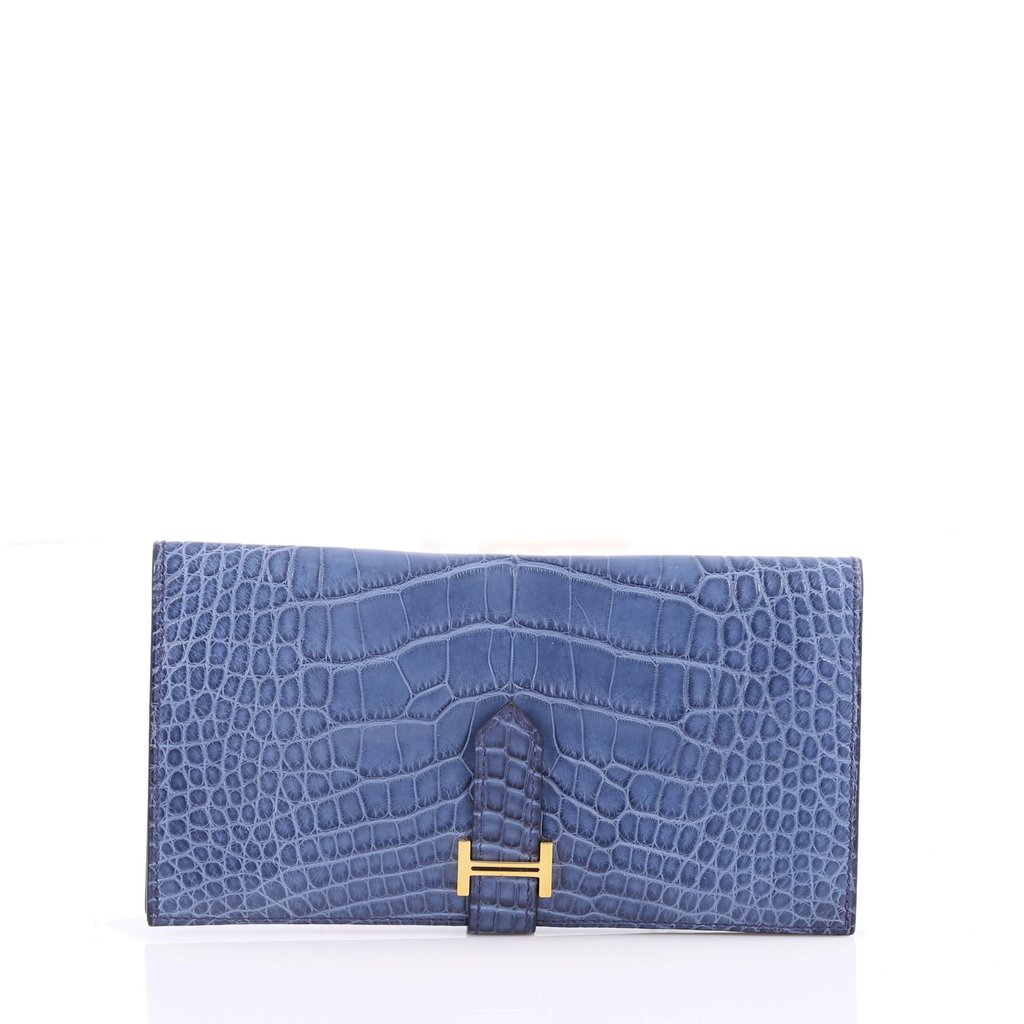 This skin is farmed from the Alligator Mississippiensis alligator, also known as the American Alligator, natively found in… you guessed it… the Mississippi River region! Hermès’s farms are located in Texas, although the species is found throughout the Louisiana Delta, and even up to the Southeastern states as far as the northern coast of North Carolina.

The scales of this species are quite distinct, and a stark change from the more fine appearance of Hermès crocodile skins. The scales on this species are large, square, with rougher ridges due to the toughness of this skin itself. Bags made of this material feel thicker, and are markedly more durable against scuffing and scratching.

To identify this skin, take another peek near the brand stamp. If you see a “□” square, it’s Alligator Mississippiensis! 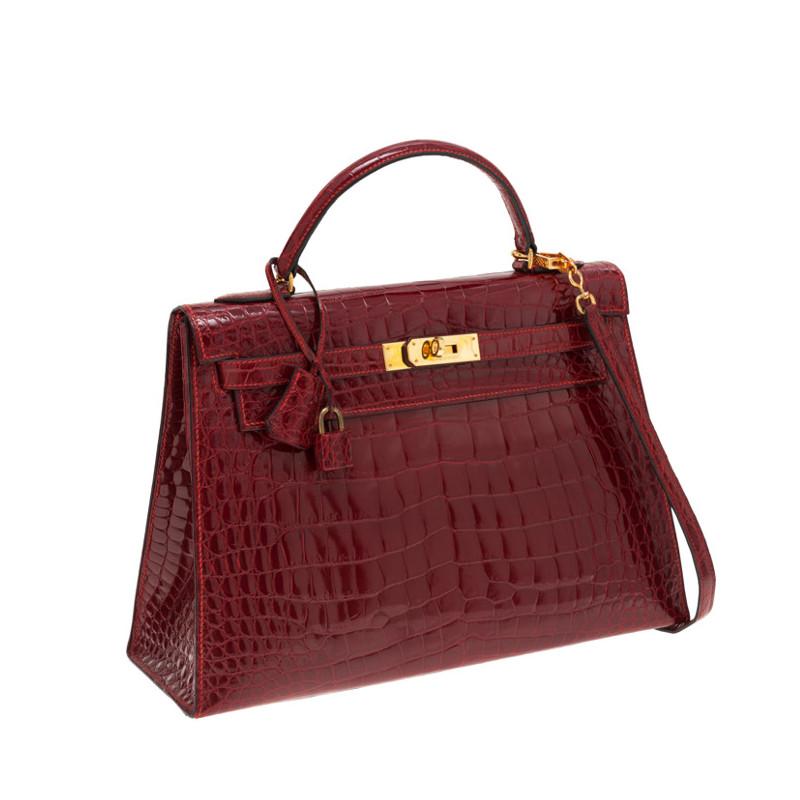 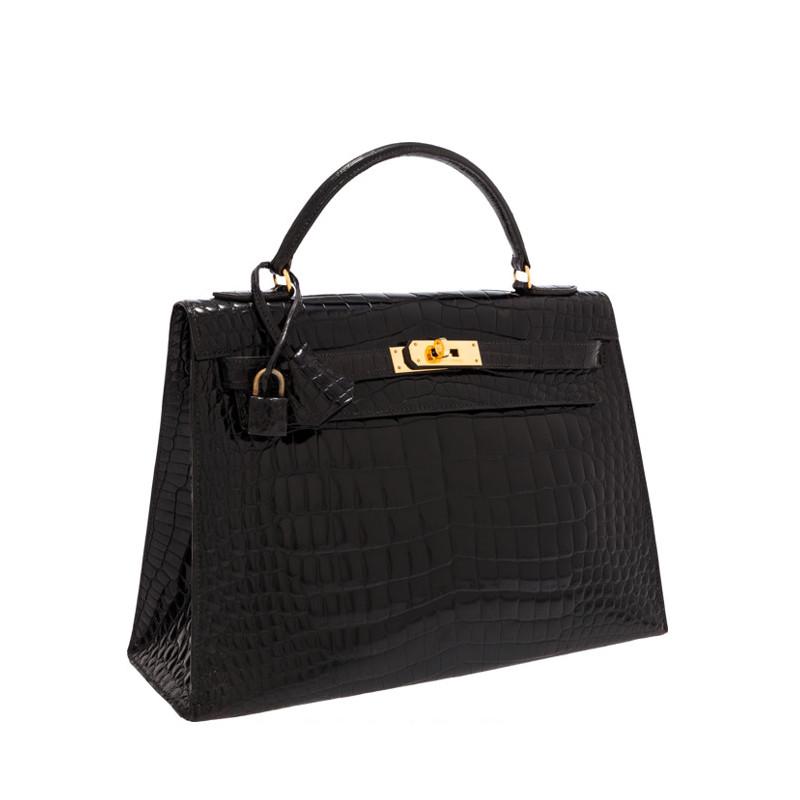 This skin is only ever used in vintage Hermès bags. Due to the lack of quality sources for Caiman skins, Hermès was forced to halt their use of this material, in favor of the contemporary Porosus and Niloticus varieties, simply to keep their rigorous standards for product quality.

When in circulation at Hermès, this skin was taken from the Caiman, a close relative of the American Alligator, but neither a Crocodile or Alligator by taxonomic standards. This species is native to Central and South American marshes, swamps, mangrove rivers, and lakes. The scales of the Caiman are generally tall, rectangular, and flat, while the overall skin feels thinner than Crocodile and Alligator.

To identify this skin, look closely at the brand stamp. A “○” circle indicates that this bag is Caiman. 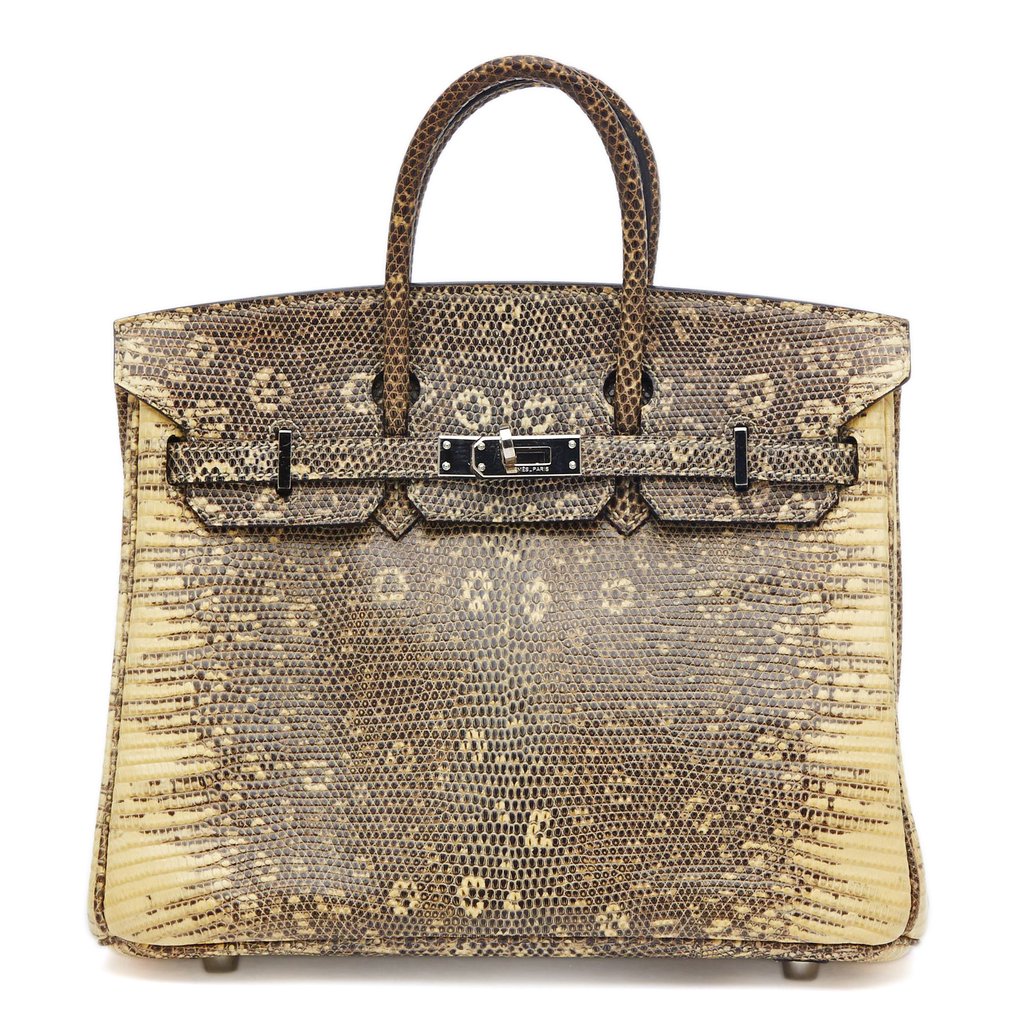 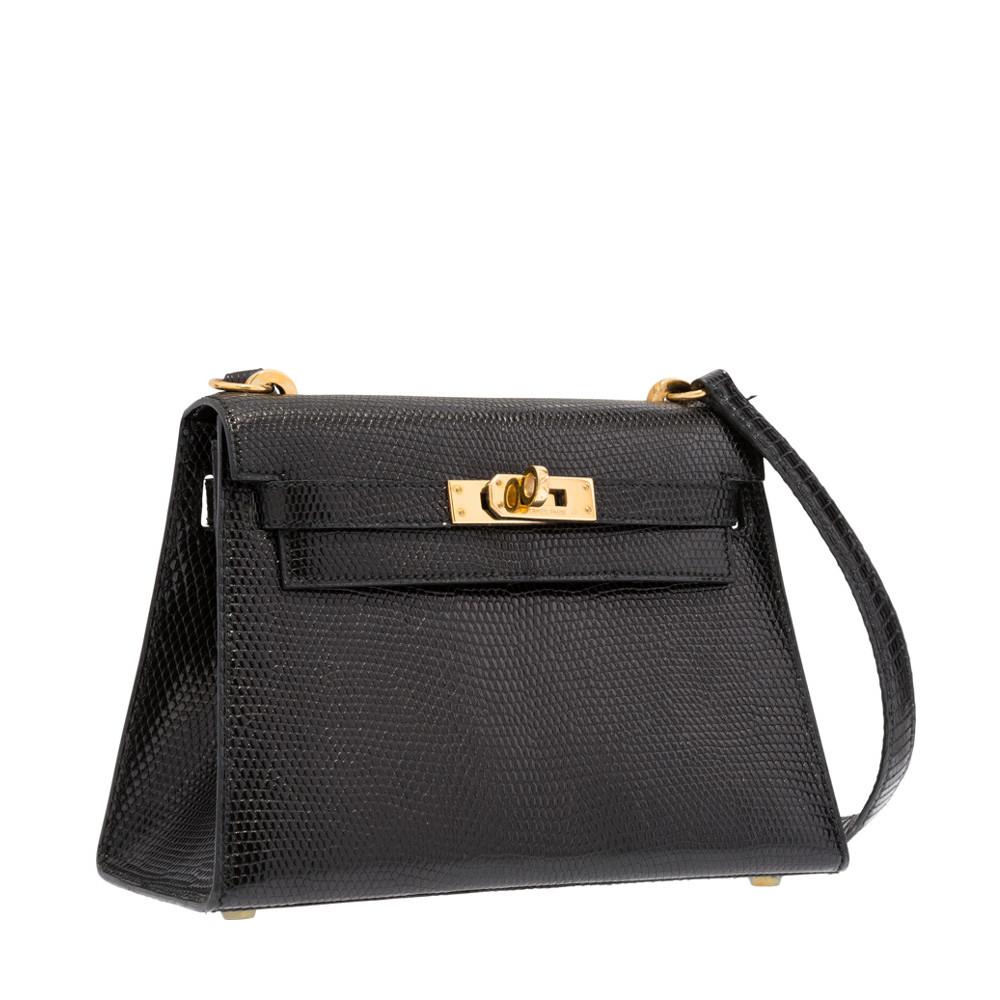 The skins of the Varanus Salvator lizard come to Hermès by the way of Southeast Asia, where they are both native and farmed. This skin often makes it’s appearances in the iconic “ombre” look, due to the natural ringlet patterning on the animal.

The scales of this lizard are identifiable by their small, circular, and overall hexagram shape. There may also be a faint natural darkening effect closer to the center of each scale at the center of the bag, as the small spines were polished off while preparing the skin for construction.

If you direct your attention back to the brand stamp, you may see a “=” double hyphen. If so, it’s a clear indication that the bag in question is Varanus Salvator. 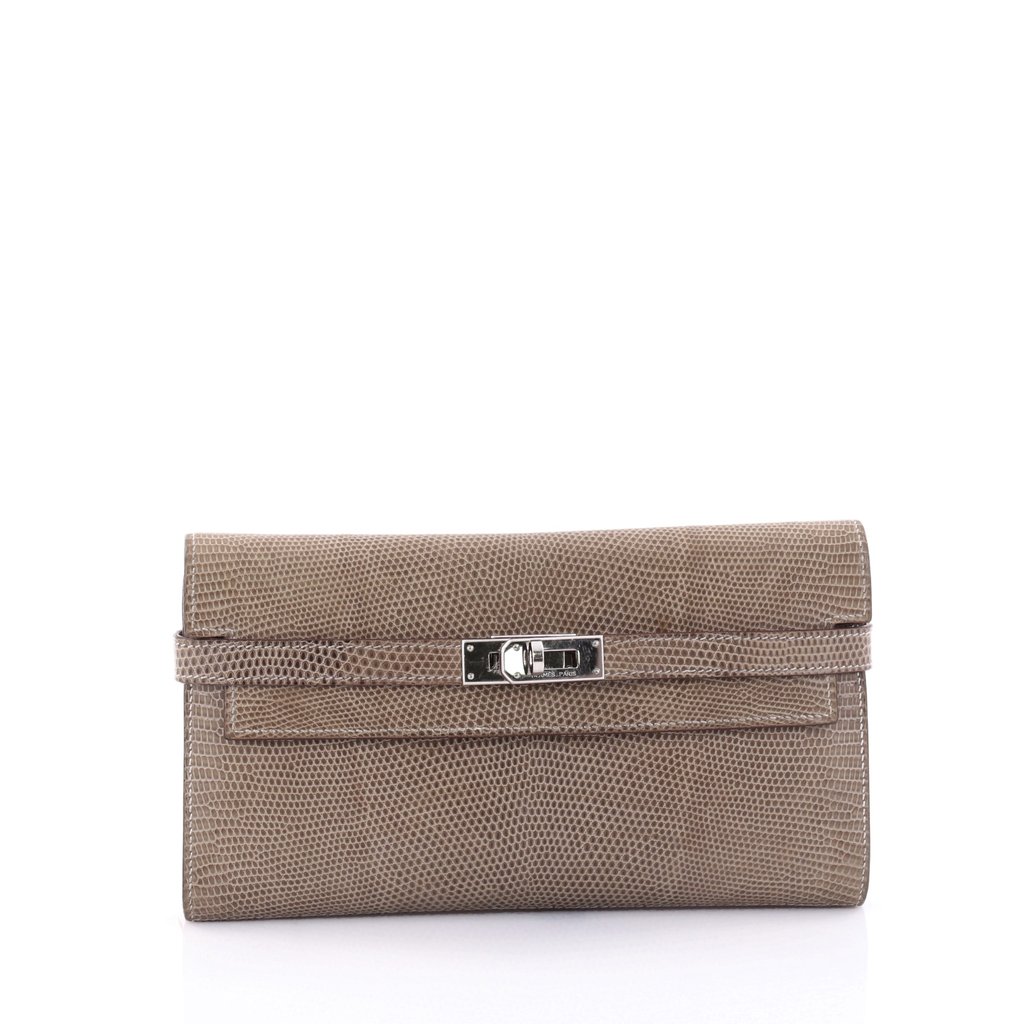 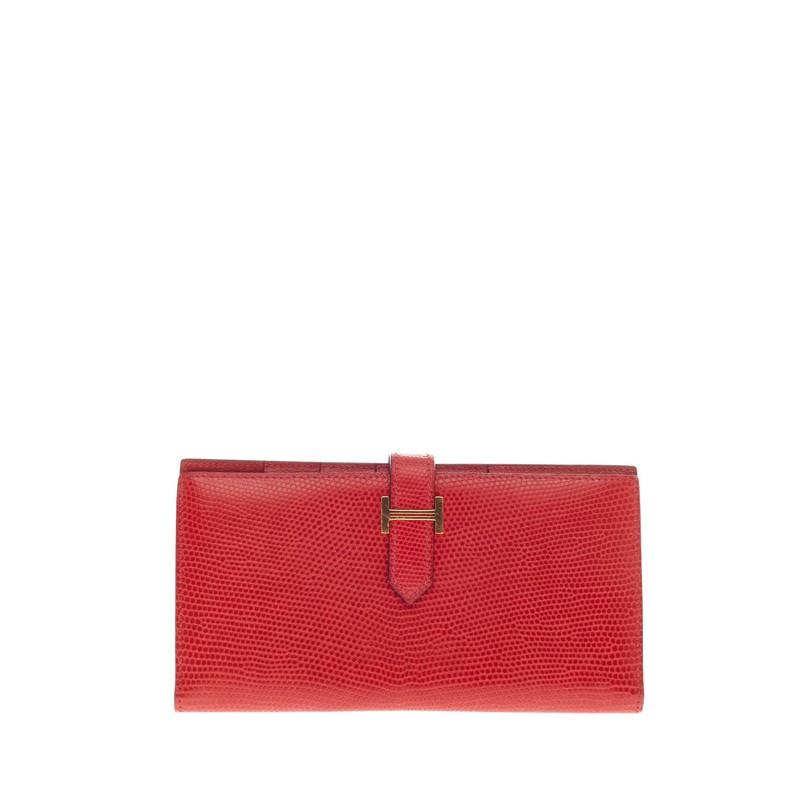 The more common of the two Lizard skins, Veranus Niloticus, is used across a variety of Hermès leather goods. It can always be found in trims for the Club Birkin line, and is a go-to lizard source for small accessories and handbags.

The scales of this lizard are very similar to that of Veranus Salvator, and can be very difficult to differentiate unless compared simultaneously. The scales of Niloticus Lizard are more ovate than circular, and the webbing is tighter between each scale which minimizes the overall hexagram shape, but the end effect is quite similar to Veranus Salvator.

To be surefire about which lizard you are dealing with, look no further than the brand stamp. If a “-” single hyphen is what you see, you have Veranus Niloticus on your hands. 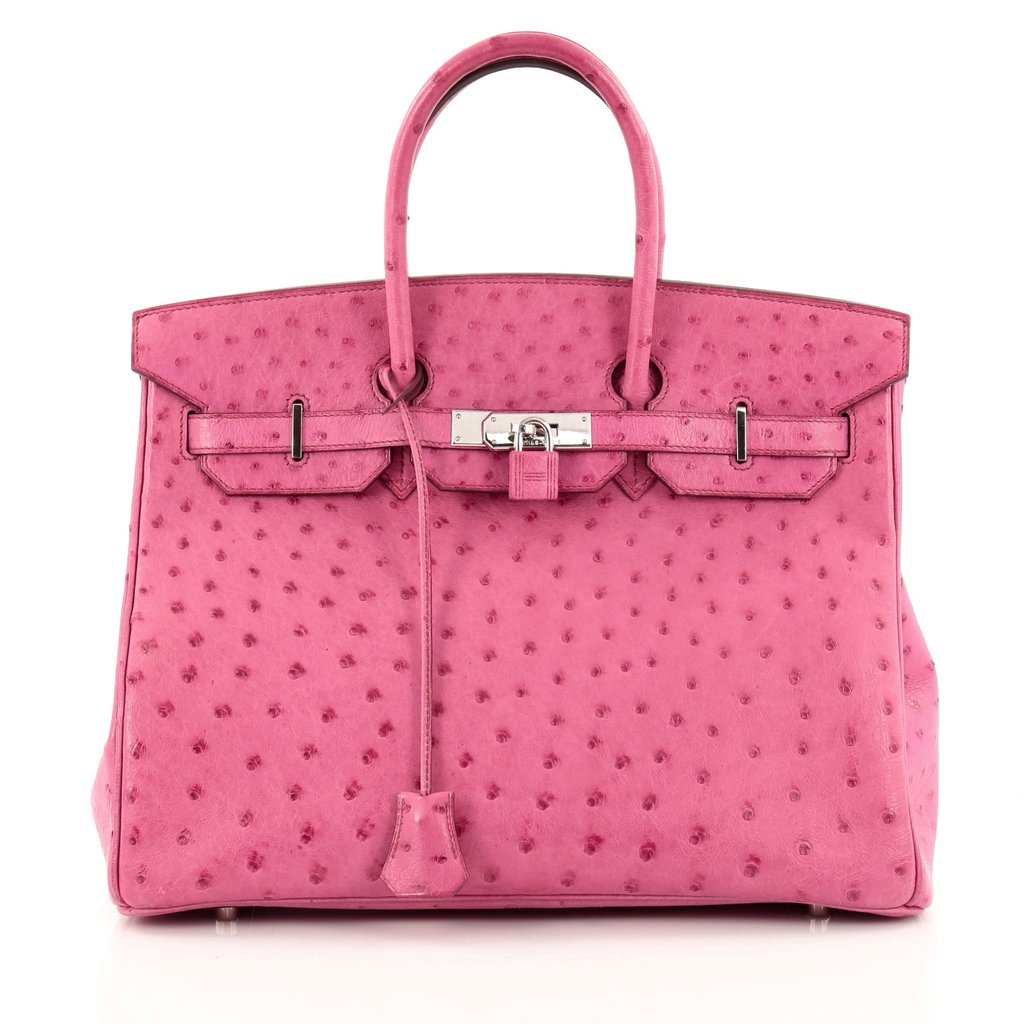 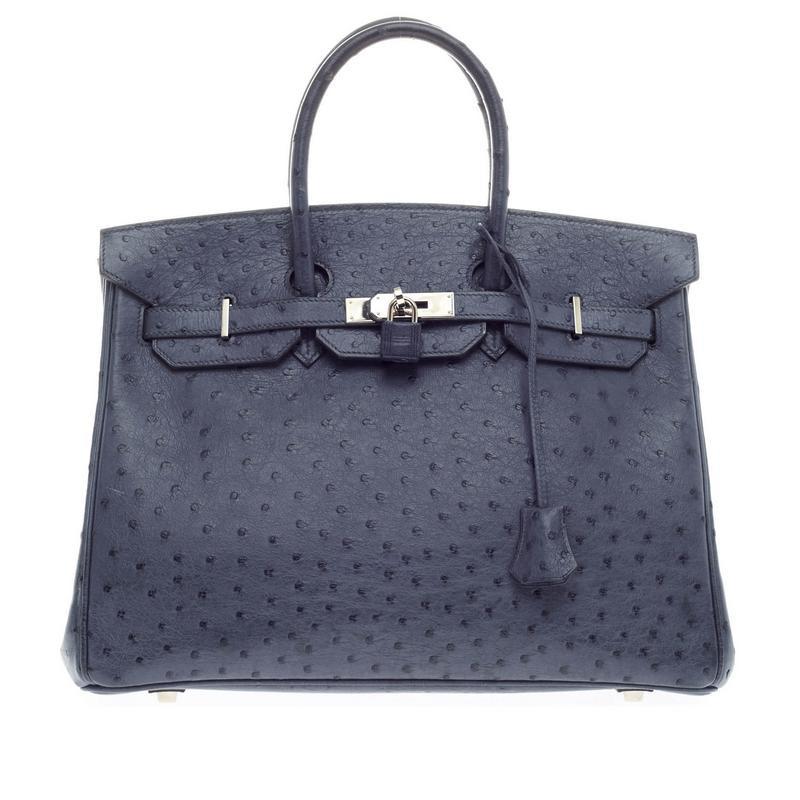 As the most easily identifiable exotic skin that Hermès uses, Ostrich is the only exotic in current circulation that lacks a special foil marking. Luckily for us sleuths, the dotted, porous look that is indicative of this skin, gives it away every time.

Hermès’s Ostrich skins come from South Africa. They are farmed from Struthio Camelus ostriches, also known as the common ostrich, and are specially treated with colorations that are often exclusive to this skin. Notable examples being: Violine, Terre Cuite, Gris Agate, Tangerine, and Mousse.

All of these exotics are used throughout Hermès’s leather goods repertoire, so now that you know where to look, try it out yourself! See what you can identify in “the wild.”