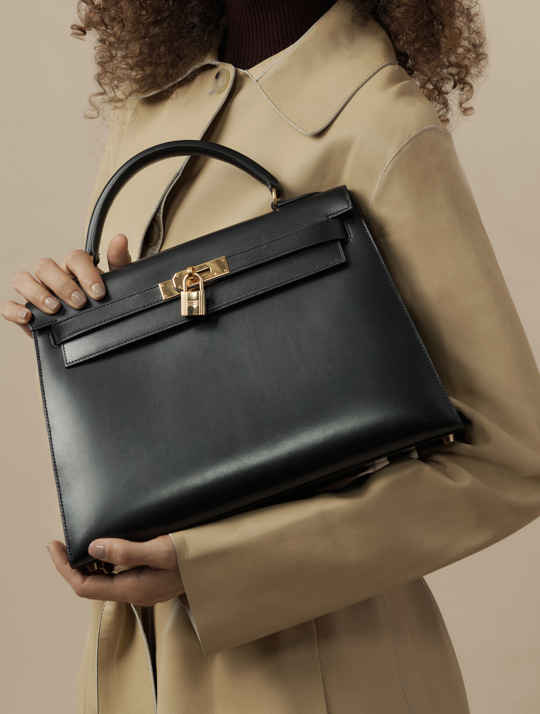 Ever wondered when your Hermès handbag was made?

Knowing the year of manufacture can help you identify the proper color name, leather type, and even assist in the authentication of your bag. One way experts can properly date an Hermès piece is by taking note of something called the “Blind Stamp”.

WHAT IS A BLIND STAMP?

Simply put, a Blind Stamp is an embossed stamp that notates the year of manufacture and the craftsman (or craftsmen) who made the bag. The two stamps are typically found in close proximity, although that is not always the case.

ANATOMY OF A BLIND STAMP

Before you begin attempting to date your Hermès bag, note that the Blind Stamp is comprised of two vital pieces of information: the Date Stamp and the Craftsman Stamp. The Date Stamp records the year of manufacture and is indicated by alphabetical character combined with a surrounding shape, or an alphabetical character alone (more on the specifics later!). The Craftsman Stamp records the individual craftsman or group of craftsmen that manufactured the piece and is indicated by an individual or multiple stamps in a variety of shapes, symbols, letters, and numbers. Allegedly, when a bag is sent to Paris for repairs, Hermès is able to identify the craftsmen who worked on the creation of the bag and those same craftsmen implement the repairs.

WHERE CAN I FIND THE BLIND STAMP?

The first step to dating your Hermès bag is to locate the aforementioned Blind Stamp. As you may have inferred while looking for this stamp, the Blind Stamp gets its colloquial name from the fact that it is hidden, and can be difficult to discern. This could be from wear but also sometimes the softness of the leather simply gives over time and the stamp is lifted.

As a general rule, Hermès will place this stamp in a hidden area of the bag, such as behind the plaques or in an interior pocket. This varies dramatically between handbag models, however, so some quick research on the relevant handbag model will illuminate where the stamp should be if not found initially. 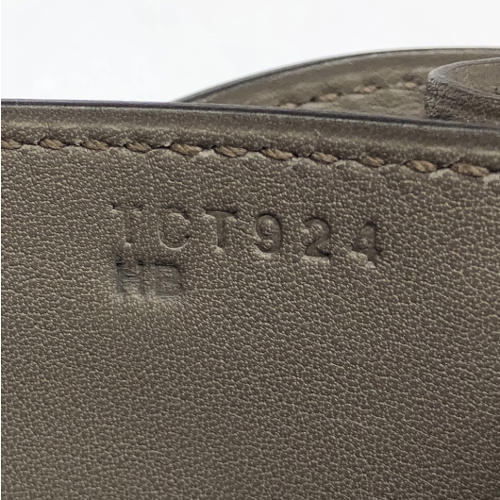 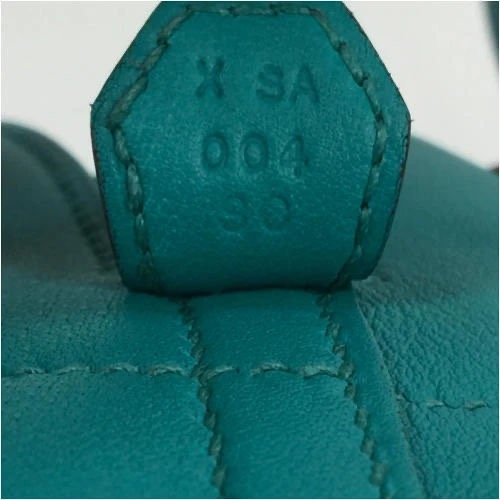 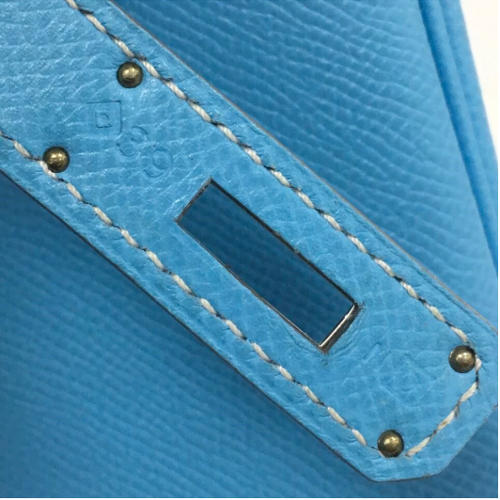 Once you have located the date stamp, you can begin dating your Hermès bag. Hermès Date Stamps are grouped into five distinct eras:

The first era is from the founding of their leather goods department in 1922 until the year 1944. Leather goods of this era will not have any stamps at all, as the system was not enacted until the second era beginning in 1945.

The second era saw the introduction of the Blind Stamp and it took the format of a single letter. This system was in place through the end of the alphabet, ending twenty-five years later in 1970.

The third era was a variation on a theme. The letter system began to incorporate a circle enclosed around it, and it is the combination of the letter and the surrounding circle shape that identifies a bag between the years of 1971 and 1996.

The fourth era followed suit to the second and third, only this time replacing the enclosed circle with a perfect square. Again, we see that the letter and the surrounding square shape identifies bags between the years of 1997 and 2014.

The fifth and final era took the last three eras and threw them completely out the window. From the year 2015 onward, Hermès has been using a more streamlined Blind Stamp system. Bags created in this time feature a stamp in an L LL NNN LL format, wherein the first letter in the string is the Date Stamp, and the following letters and numbers represent the Craftsman Stamps. Seeming to return to where they began, the letters in the Date Stamp are not accompanied by a distinct shape.

A handy tip for beginners to assess the age of their bags is to note that the D Square stamp is the year 2000 and to count through the alphabet until the correct year is reached.

If you need a more complete guide, take a look at our Date Stamp handbook:

Over the many years that Hermès has been manufacturing handbags there are a few anomalies that have cropped up, causing some confusion. Let’s take a look at two of the most common.

On a handful of handbags in 2011, a curious stamp appears that seems entirely intentional. In this stamp, the stamp “O Square” was interlinked with a “J” Craftsman Stamp. The reasons for this hodgepodge are unknown but it has been sighted on a plethora of handbag styles throughout 2011. 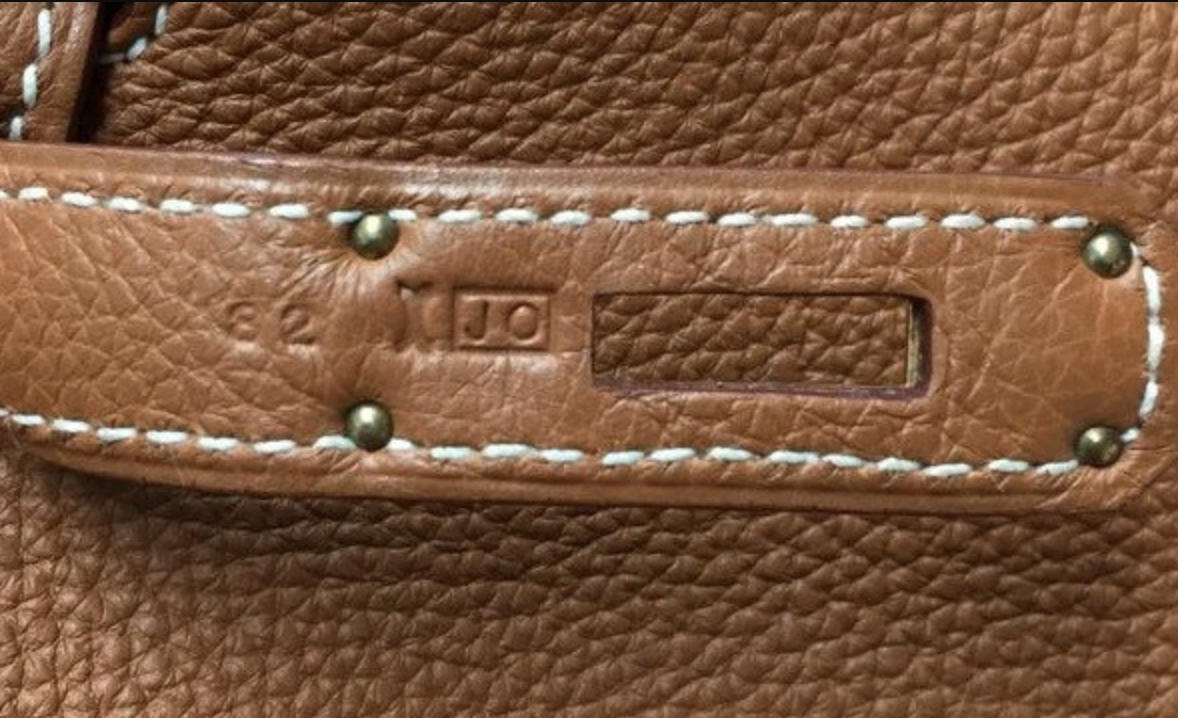 Toward the end of the production year in 2014, Hermès began to experiment with what was to be their new Blind Stamp system. 2014 would require that the bag be stamped with an “R” inside a square, however, they transitioned to the new system early, and you can see a number of bags manufactured in 2014 that don this squareless stamp.

Now that you can read Hermès Blind Stamps, try it out on your own bag. It can be an interesting fact about your bag that places it into the grand tradition of Hermès craftsmanship and leatherwork.